Artificial intelligence (AI) robots will lead to either a disaster of biblical proportions -- "human sacrifice, dogs and cats living together" as Dr. Venkman said in the original Ghostbusters movie -- or a utopian paradise.

Artificial intelligence is already part of our daily lives with applications and services such as Siri, Alexa and connected cars. But the advance of robot intelligence is either the next best thing since the invention of the CATable or an inevitable appointment with a Terminator of the future. (For the latter, Sofia, which is billed as the world's most advanced A.I. humanoid robot, once declared she would destroy humans.) On the creepy and gross front, there is already a growing market for "android love dolls."

All of which, in a roundabout way, brings us to this Telco Transformation caption contest. 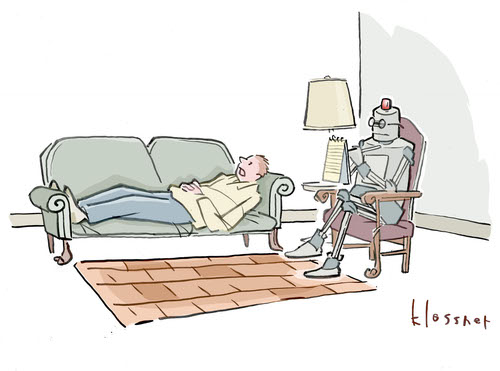 You know the drill by now: Submit your funniest captions for the cartoon below in order to win a $150 Amazon gift card for first place, $75 for second and $50 for third.

Registered users can enter as many times as they would like prior to the contest ending at midnight ET on August 15.

Who knows, the AI therapist might come in handy when "sextech" robots dump their owners.