Cevis said Verizon sees SDN as the enabling element for better security, increased agility and flexibility and the cornerstone of its virtualized services. It first deployed its SD-WAN service in 2015.

The Next Big Thing 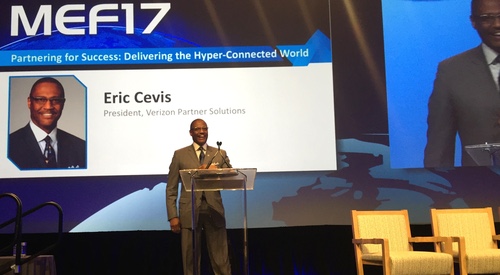 Eric Cevis, president of Verizon Partner Solutions, covers a lot of ground during his keynote address at MEF17.
In 2016, Verizon started to move way from traditional telecom equipment to standardized open platforms via white box deployments on its network for routing, security and optimization. It also launched an OpenStack-based solution hosted directly on its network.

"That brings us to 2017," Cevis said. "Clearly, having deployed software-based solutions on our open platforms is the focus that Verizon is bringing to the discussion here. With our MEF teammates, we're working on the automation benefits versus more manual interactions."

Verizon and other service providers are faced with mobile devices driving more applications and data to the cloud while also dealing with unpredictable traffic patterns and rising security threats. Cevis said that SD-WAN was one way to deliver better services to end customers. Last week, Verizon announced a wholesale software-defined wide-area network solution offering that was based on MEF's SD-WAN standards. (See MEF Takes On SD-WAN Standardization.)

"We believe this is a big push for us to make certain we continue to connect people, places and things," Cevis said. "We want to give them the best of both worlds; making sure that they have a strong network at the end of the day but also have the performance and reliability beyond the Internet with what comes from a private IP network."

"From my vantage point, if we look at the needs of our customers across the globe it's really the genesis of the project of interoperability," he said. "What do we need to do to is push more standards.

"We need to push towards single portals, continue to understand that we have to change our processes to make a difference for the digital economy that wants us to be more agile, more assured and more orchestrated with the products and services that we put forward on the network."