State of NFV & SDN: We're Not There Yet

DENVER -- NFV & Carrier SDN -- There are various reasons why SDN and NFV haven't reached warp speed just yet, including a reluctance by end customers to embrace new technologies, according to BT's Jim Sabey.

"In BT's opinion, and somewhat my opinion, its a combination of both customers and the network providers," Sabey said during a panel titled, "Are We There Yet? The State of NFV/SDN Deployment."

"What I mean by customers is that everything around NFV and SD-WAN is a new technology. The customers I've talked to on a daily basis, and the team that I head up, we're hearing that they're a little hesitant to just jump in and do an overnight switch from traditional MPLS to SD-WAN technologies. They want a phased approach."

On the NFV front, Sabey said the enterprise customers were hesitant to put various virtualized services, such as security, routing and performance management, onto a single box.

Steve Shalita, vice president of marketing and business development at Pluribus Networks , made the point that SDN is really about how the network itself changes within the data center or within an infrastructure, while SD-WAN is a transformation of the WAN infrastructure that includes moving away from MPLS.

"It's a common confusion to mix SDN and SD-WAN together," he said. "It's really an important point to look at them as separate technologies. The challenge, the inhibitor, on the SDN side is the complexity from the implementation perspective."

Vikram Saksena, chief solutions architect at the office of the CTO at NetScout Systems Inc. (Nasdaq: NTCT), said among the lessons learned to date for NFV was implementing straightforward mapping of VNFs so that service providers would have the right business cases for deploying them.

"I categorize this phase as a combination of learning as well as some really successful, focused deployments," he said.

An NFV/SDN State of Mind 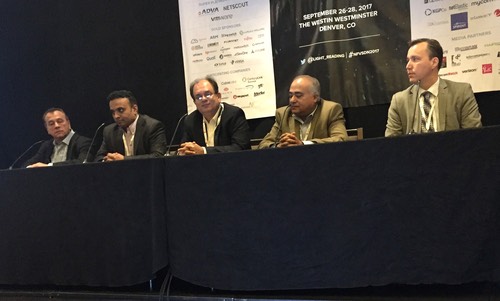 Speakers at the "Are We There Yet? The State of NFV/SDN Deployment" panel are, from left to right, Steve Shalita, Pluribus; Shashi Kiran, Quali; Ian Roy, IBM; Vikram Saksena, NetScout; and Jim Sabey, BT.
IBM's Ian Roy, associate partner of network and OSS transformation, said that he was seeing more self-contained, interim deployments of NFV and SDN that were part of the bigger transformation process. Sabey said that BT was taking the same approach with its customers.

"It's not one-size-fits-all," he said. "Looking at it from the lens of automation, what we've seen is that use cases that are simpler to put into practice have taken off."

Cultural changes were addressed during the panel session. Sabey said that when BT started on its virtualization journey, it took a top-down approach from its leadership team that cut across all of its employees, including lawyers.

"The lawyers have to be able to understand the technologies to sign off on the contracts," he said. "It's not just about the tech guys getting training; it's enablement across all areas. The cultural changes were awesome to see."